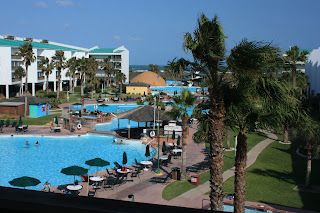 John and I have been married for 41 years this coming Monday! I'm wondering where the years all went??? To celebrate this year, John has whisked me away on a surprise weekend -- I actually really had no idea where we were going, which I hate, because I really, really, really have a control freak problem... but I'm working on it.


Anyway, this afternoon I got in the car with him and ended up at Mustang Island at a really nice resort called Port Royal which boasts "Texas's largest swimming pool." I believe it...its a series of about 5 pools that all kind of cascade into each other. This is a families dream spot - the kids that are here are freaking out!   Very nice.  And the back of the resort lets out at the beach which we are going to explore tomorrow. 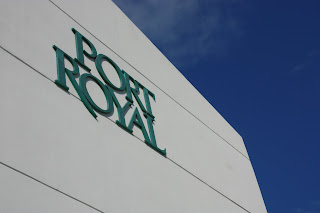 Tonight we drove (floated across on the ferry, actually) over to Rockport-Fulton and ate at the Boiling Pot.  Very interesting place - they throw the food out on your table on some white butcher paper, hand you to wooden mallets and let you have at it!  And we did - shrimp, crawfish, blue crab, sausage, corn on the cob, and new potatoes all boiled up with cajun seasoning which totally burned!! We also had a cup of gumbo which was delicious, but also very HOT!  Delicious - it gets 4 stars!  The ferry ride back took a while longer, seems most people were on their way ON TO the island on Friday evening.


Tomorrow we're off to the aquarium, the USS Lexington and whatever else he has planned.  There's some big evening meal plan that I'm in the dark about, so I'll have to let you know tomorrow what that is... see you then!


PS: I'm putting photos on the Picassa if you know where to look! 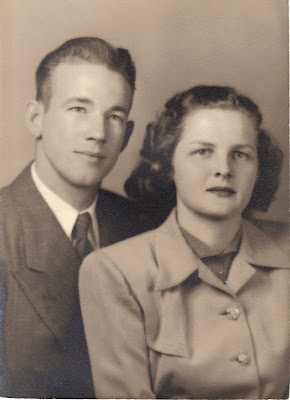 Her suit was baby blue....
Posted by pittypatpages.blogspot.com at 10:42 AM No comments:

Easter weekend came and went in a flurry of activity. 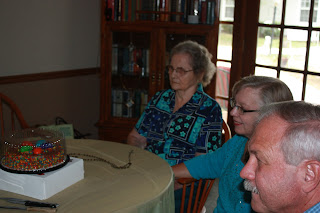 Saturday the family met at Grandma's place and shared some sweets with her.  We prayed a couple of prayers before eating and Grandma sure remembers her prayers - she could lead us all in saying the Lord's prayer.  It was good to see her up and about, although she was very quiet, and she wanted to nap when we left.  It might have been the two pieces of lemon merenge pie she ate! 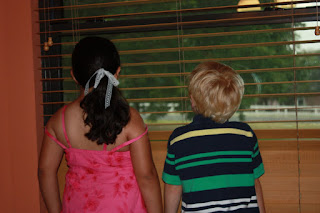 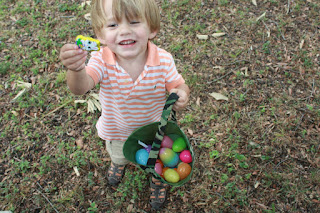 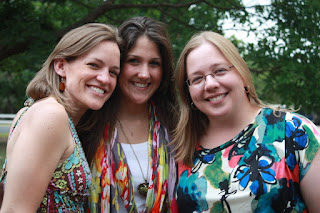 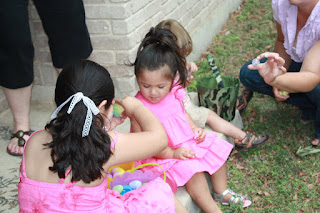 Easter Sunday we were at Mike and Kathy's for lunch.  We finally got to see Savannah and Addison! And the Schwencke boys were there - all the kids are growing like crazy!  A fast and furious easter egg hunt!
I missed KT terribly, but I got to see some pictures of her having her egg hunt in Houston, so I'm better now.  I hope everyone had a blessed and happy Easter!
Posted by pittypatpages.blogspot.com at 10:36 AM No comments: 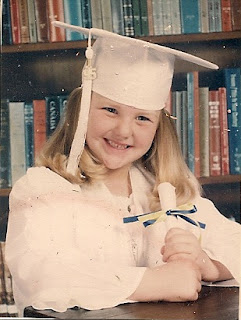 This cute little thing is graduating from college in about 2 weeks!  So so so proud of her!
Congratulations, Molly!
Posted by pittypatpages.blogspot.com at 4:45 PM No comments: 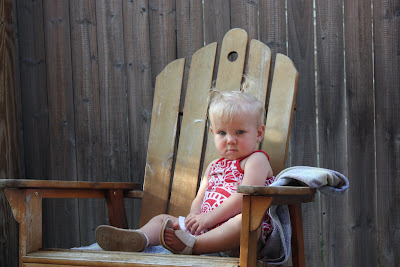 Now what?
Posted by pittypatpages.blogspot.com at 4:26 PM No comments:

I don't know why, but somehow this photo makes me sad.  Dad looks so proud here, his chest out, holding on to Mom and Gene Michael like he's so happy to have them.  I had to clean mud off of this picture before I could scan it.  Just thinking about that mud, how Dad's health fell after this and all that they went through, just makes me sad. *cry*
Sorry, had to get that out.... 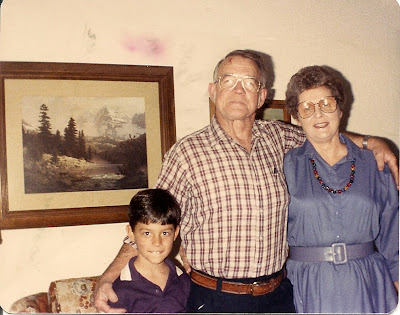 Posted by pittypatpages.blogspot.com at 12:53 PM No comments:

Found this photo of my mother - obviously this was her wedding day since I recognize that suit and she has a corsage on.  The other woman is my Aunt Leona.  I have no idea who the child is.  Anyone know?  Maybe its one of Ed's? 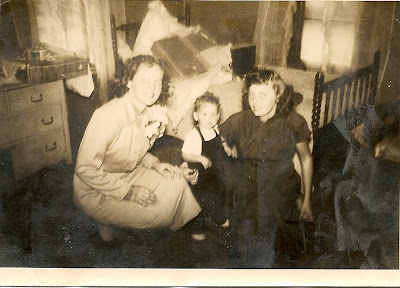 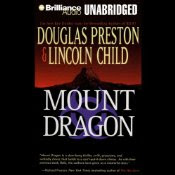 What I've Read would be the better title here, because I've finished this one this morning on my drive to work!  This is another novel by the pair that wrote The Relic, Douglas Preston and Lincoln Child.  The topic here is biochemical research and the dangers of genetic manipulation, which was really fascinating.  It got me to thinking about where we're going with our genetic changes to food, cattle, and anything that we eat or ingest.  Very thought provoking!

It also interested me in the desert areas of New Mexico, since that's a state we drive to at least once a year on our ski vacations.  The site of Mount Dragon is near the Trinity site where they tested the first nuclear bomb, and the adjacent Jornada del Muerto desert.  I had to look that up yesterday, I had never heard of it.  The Trinity site sounded familiar, but I think I'd like to see some of this area someday.

From the website at Audible:  "Guy Carson is a brilliant scientist at GeneDyne, one of the world's foremost biochemical companies. When he is transferred to Mount Dragon, GeneDyne's high-security genetic engineering lab, his good fortune seems too good to be true. Carson soon finds that it is. He learns that GeneDyne geneticists are tinkering with a common virus with an eye on the enormous profit to be had from a cure for the flu. Their cure involves permanently altering DNA in humans, and Carson's job is to stabilize the virus. But Carson starts to wonder if this is justifiable, even for the most noble medical cause. Altering genes is a risky job, and the possibility of creating another killer virus is very real. What's more, Mount Dragon harbors another secret that puts the world at horrifying risk."
Posted by pittypatpages.blogspot.com at 10:33 AM No comments:

The iris have just been gorgeous this year...these came from my dad's yard.  He would be so proud of them!
Posted by pittypatpages.blogspot.com at 10:18 PM No comments: 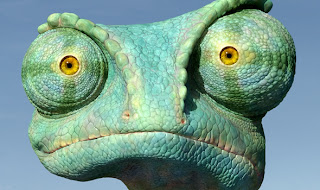 Off we went to the movies today, to celebrate John's 62nd birthday.  We were going to go see Paul, but the times that it was showing didn't work for us, so John chose Rango.  I'm so glad he did!  This movie was a fantastic piece of art work - the animation was amazing.  They've come so far in the quality of animation, I couldn't believe how real these characters were.  And terribly likeable! Rango starts out as a pet in a terrarium, and teaches us all a lesson in adaptation! Very, very good.  But not (I'm stressing here, NOT) a child's move, so don't take your young kids to this.  They won't understand the humor and won't get the "nods" that the writers make to many old westerns and stars.  Go see it!
Posted by pittypatpages.blogspot.com at 9:19 PM No comments:

Ella in her bumbo (bumpo?)(bumpbo?) 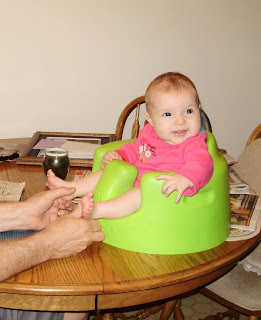 These are great - she's all snuggled in there!
Her grandpa sure looks happy! 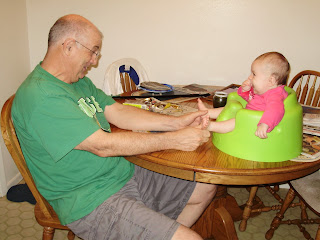 Posted by pittypatpages.blogspot.com at 9:56 PM No comments: