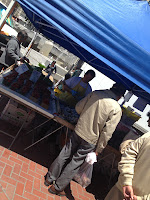 We spent the morning at the City Center Farmer's Market.  I was on the hunt for various types of garlic for my fall garden, and I scored a couple of pounds!  There are three varieties, but I don't know what they are called - one white one, a purple and white striped, and a light brown.  Yeah!!  Can't wait to see how they do in our raised bed garden. 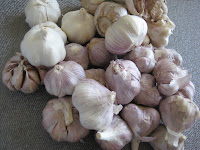 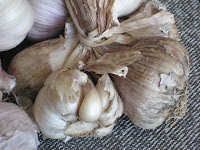 We had lunch at one of the food trucks that were all over the market - a chicken gyro at a Greek truck.  It was really good - had feta cheese which was delicious! 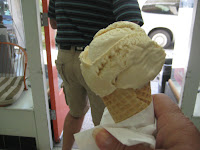 Afterwards we road the BART back to JR's and after a bit of a rest, we were off to explore part of the Mission area.  It's amazing what one single block difference makes, one side of the block is still a bit seedy, and the other side of the block includes some nicer stores that have moved in and the area is being renovated.  I'm guessing in just a few years that the Mission will be a very nice area to walk around in. We had ice cream on the way back!
Tonight we had spaghetti at home with some of the cheeses and bread that we bought today at the market.  Delicious...A very nice day!

Posted by pittypatpages.blogspot.com at 11:10 PM No comments: 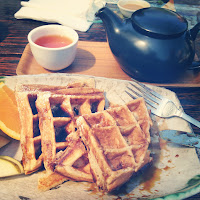 Day four found us having brunch at around 10am at the Samovar Tea Lounge.  That was a real treat - each of us ordered a selection to eat and a type of tea to have with it. 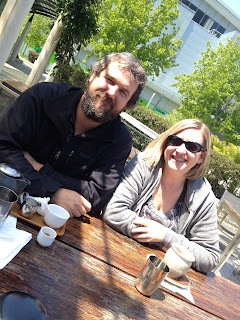 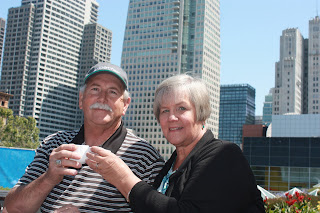 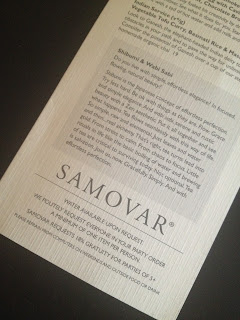 JR and I had the Ginger Quinoa Waffle which was served with fresh fruit and a vanilla infused palm nectar (which was the syrup.) I had a tea called "Nocturnal Bliss" which was delicious, lemony and herbal. The lemon taste came from lemon grass.  JR had Lapsang Souchong, which smelled like smoke!  Ashley ordered something called Jook with smoked duck, which was a rice base that had been cooked until it was custardly, served with savory sides such as toasted garlic, peanuts, cilantro, and had a sriracha sauce (hot!) She had a chi tea.  John ordered their Local Artisan Cheese Platter which had various fresh fruit, two types of cheese, crackers, and a portion of honeycomb.  He stuck with his usual Earl Grey tea.  It was so nice to sit outside and enjoy the sights of downtown.  This place was right in the middle of town.
After brunch we walked through Yerba Buena park to the Museum of Modern Art (MOMA).  We walked all four floors.  Interesting, although I'm not much of a fan of modern art.  There were some photography exhibits and a floor of mixed media art that combined various textiles.  On the top floor they had a roof deck exhibit of some sculptures and metal works. 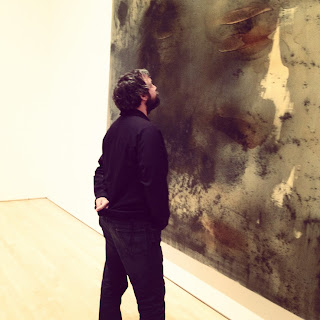 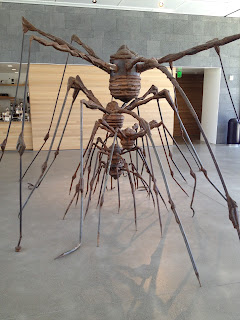 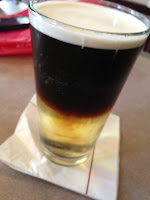 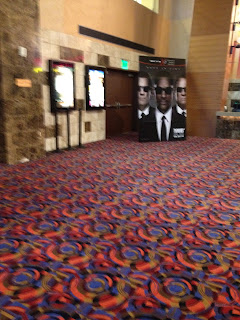 Next on the schedule came a walk to the cinema, stopping first at the Sports Bar for a beer and french fries to tide us over until dinner.
We saw Men in Black III.  I enjoyed it!  I wish I had watched the other two first so I would have remembered more about them, but this one really was a stand alone story.  Great special effects.
Home afterwards to rest up, after picking Winston up at doggy-day-care!
We're having Thai food tonight...hmmm....I'll let you know how that goes!
Posted by pittypatpages.blogspot.com at 11:32 PM No comments: 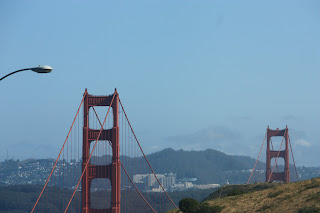 On Monday we took a road trip!  One of the things that I really wanted to do on our visit was to see the Baker Seed Bank in Petaluma, California.  I've become a believer in using heirloom seeds whenever possible, so this year I ordered several things from this company.  Since this little town was only about 35 miles from JR and Ashley, I'm glad we were able to go.

We traveled across the beautiful Golden Gate Bridge, and north of San Francisco to this quaint little town. They have a really nice walking area downtown with plenty of great shops. After buying several unusual and different seeds for this year's fall garden, we walked through several of the shops, including some antique shops. We had lunch at an outdoor table at McNeely's which is adjacent to the local theater/auditorium/music venue. 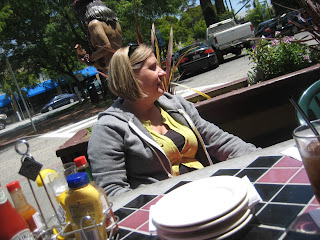 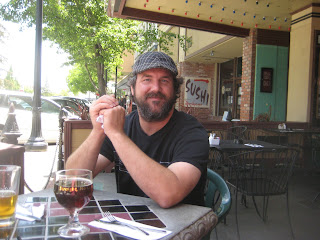 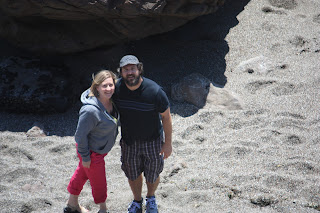 We drove through some little communities along the California coast, stopping at Valley Ford, then Bodega Bay.  What a gorgeous area! And the weather was fantastic.  Warm enough to go without a jacket, unless there was a wind.  We traveled on to Stinson Beach and Port Reyes.  Along that route there were several oyster shops that were having special Memorial Day oyster roasts that were packed!
What a fun day!  I do have to say, California is gorgeous. 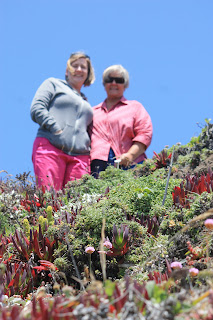 Posted by pittypatpages.blogspot.com at 10:26 AM No comments: 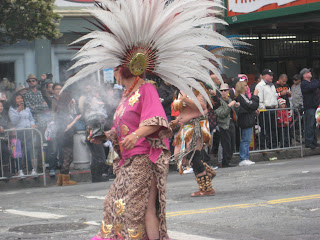 Started the day at the Carnaval Parade which was going by only one block from JR and Ashley's front door....now that was nice.  We stayed and watched for about 1-1/2 hours, but the entire parade took about 4 hours. There was such a brush of people! Whew! 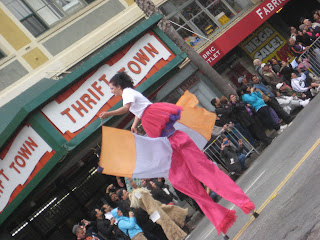 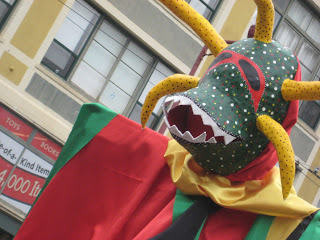 After watching for a while we walked down thru the Mission area to the Delores park.  This park has been undergoing some renovation to include some features for children and to make it more available to the public.  We stopped before getting there at a little market and picked up some cheeses, crusty breads and salami.

We had a great little lunch on the lawn there, watching the dogs, people and children going by.  Lots of dogs.
Then we made our way back to their house through their back alley.  This alley is a tourist spot, where local artists decorate the walls on both side of the alley.  JR said that the first artworks were all comic book characters, but they have slowly been replaced with more political statements.  JR's garage are is the only one that is still decorated with The Fantastic Four characters.  Very interesting. 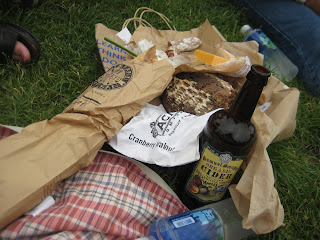 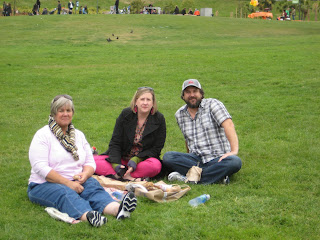 Tonight we're ordering in a pizza and watching a movie...early to bed.  Tomorrow we have a full day planned!

Posted by pittypatpages.blogspot.com at 8:38 PM No comments:

Arrival Day at JR and Ashley's


I'm in love with JR and Ashley's condo! It's beautiful, huge big ceiling in the main space on floor 2, big open windows with a view of a very interesting street out front that I could "people watch" for hours.
There are three bedrooms, a big master bedroom with in-suite bathroom, and another guest room downstairs, with a shared bathroom.
Upstairs is a loft bedroom with bathroom (they are using as storage right now until they can unpack all of their boxes -- still working on that!) That loft has a view down to the main room, with blinds that come down for privacy.
Best of all, there is an elevator to the street floor.  Hands down, one of the best features!

Posted by pittypatpages.blogspot.com at 8:05 PM No comments:

Turn up your sound and stick with it, she gets a little stronger towards the end!

Posted by pittypatpages.blogspot.com at 7:46 PM 2 comments:

The Walking Dead is filming season 3!

Posted by pittypatpages.blogspot.com at 9:22 PM No comments: 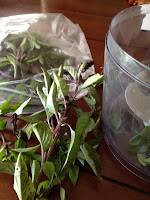 I had to trim back the basil plants this week.  They were about the flower, so I cut back all of the longer branches of each of them so that they will be encouraged to regrow and put out more from the base.  There were four different types of basil here, purple, regular broad leaf, cinnamon, and Thai basil.  I decided to try a new recipe for pesto, a Basil Walnut Pesto.  Rinse the fresh basil in salted cold water in the sink to get rid of any bugs that you may have brought in on them, although I didn't find any.  I'm thinking basil may be a little too strong for the routine garden bug. 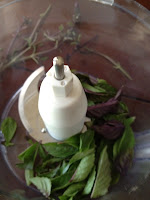 Toast the walnuts in a skillet, then put the basil leaves, walnuts, garlic in the food processor, drizzle in the olive oil and pulse.  Add salt to taste, along with some lemon juice. 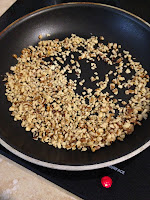 This recipe didn't include any Parmesan cheese, although I think I'll add it when I use it.  She developed her recipe to allow this pesto to be frozen, so leaving the cheese out was for that reason.  I don't know if I would ever use enough to freeze...I do like it, but not on everything!  It tasted great, although the color is not the beautiful green that you see in most pesto because I used the purple leaves.  Possibly I should have made it either all purple, or all green.  Despite the looks, it was good.  We like it on that crusty bread when you make turkey and swiss sandwiches...yummmmm!  Heavenly!

I tell you, the kitchen smelled fantastic after I made this --- I love the smell of fresh basil leaves, just brushing by it in the garden is a great experience. 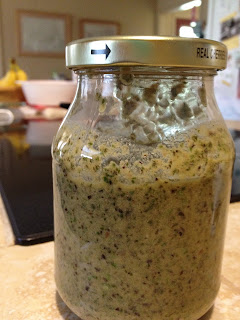 Posted by pittypatpages.blogspot.com at 9:18 PM 3 comments:

Putting up the harvest.... 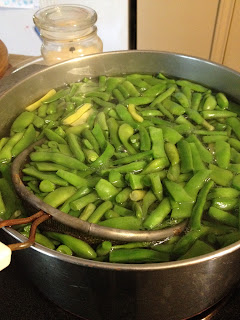 Now I remember what I liked so much about those nice packages of French haricot beans that I used to get at Costco...they were all cleaned, with all the ends snapped.  Wow...about 4 pounds of beans here that I had to get something done with, so I froze them today.  It's a mixture of regular beans, Italian flat beans and yellow wax beans.  I put up 6 bags today.  Whew!!  They sure are pretty, aren't they?! 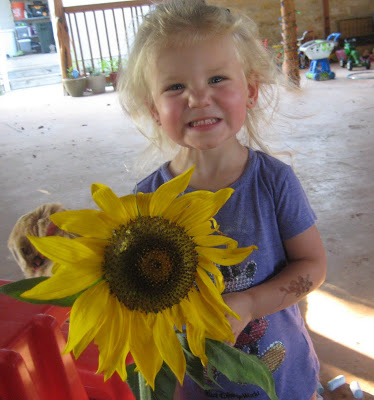 Posted by pittypatpages.blogspot.com at 9:23 PM 4 comments:

The Chicken House -- it's almost done!

It's almost done, but we've already moved the flock in.  They seriously needed their own home, and I feel so much better knowing that they are predator safe now! The only thing left to do is some trimming on the outside, and cedar paneling on the inside, with a clean out door.  But for now, just having them in is enough.  They seem real happy there!  I'm probably going to thin them out in a few weeks, maybe selling a few if I can.  If not, its the soup pot for most of those little roosters.

We had SUCH a great time on Saturday evening at our first supper club get together at the Hoyt's!  The theme was Texas and John made us some super delicious steaks, and everyone brought along a dish to compliment that.  Mari set the table with some really unique dishes that her aunt has been giving her, souvenir plates from around Texas.  They were gorgeous and so much fun to pick up and read, both front and back.  My plate was surrounded across the edge with famous Texas brands.  Really cool, and I wish I had taken a picture of the table. 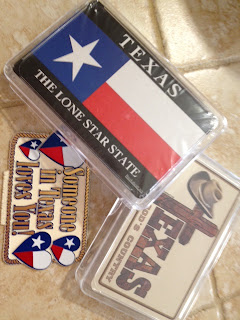 In fact, I forgot to totally take any pictures.  That's not like me, but we were having so much fun talking and laughing, and drinking some great wine, it just slipped my mind.
We played a little Texas trivia game afterwards, and John really scored...somehow my Florida guy has learned more Texas facts then I know. Not hard, really, since I have no memory any more.
He won two decks of Texas playing cards, which will make great additions to my card collection!
We sure had a good time, and I hope we can do it again soon!  Thanks all for the great conversation and meal.

Posted by pittypatpages.blogspot.com at 9:09 PM No comments: